Showing posts from July, 2018
Show all

Can you say "Fall Paducah?!" 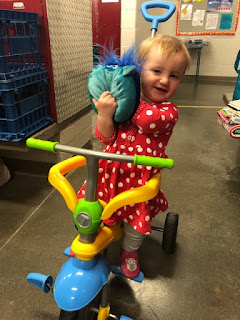 Many of you know that I belong to the local quilt club. This year I had the pleasure of being the chairperson for the show. I have to say it was a lot of work! However, the ladies that have been doing this for years made my job so much easier. I can't thank them enough. Although the show was only three days, with setup and take down, I was at the facility for six. I felt like I was living out of my truck at times! Norah, my thirteen month old daughter, had a ball while she was there with all of her adopted grandmamas. I brought her little trike with me and she was so cute being wheeled around the gym.  Anyways... I am finally recouping and thought I would share this quilt with you! Can you say labor of love?! Martha came to me in late December and said Brianne I have a quilt for you...  It was from designer Yoko Saito and Martha named it "Enchanted Village". She had several images of the quilt done by others and how they had quilted it. This was my interpretation
Post a Comment
Read more

July 28, 2018
How to Prepare Your Quilt For “Dancing With Francis” Thank you for choosing Dancing With Francis to do your quilting! Francis is an Innova quilting machine and Brianne is the artist. They have been a team for the last five years and have no end in sight for their artistic ability. Every quilt is different and unique. Each has its own dance to the stiches that are sewn into it. Please know that once you drop a quilt off, Brianne’s artistic thoughts may change to enhance your quilt. Many quilters trust Brianne and let her do her “magic”. If you have certain design elements that you wish to have in your quilt, please bring pictures with you at drop off. She will try her best to incorporate your wishes into your quilt.   Here are a few tips for preparing your quilt to bring to the studio. Backing Fabric In order for Brianne to mount a quilt to the leaders on Francis the backing of the quilt needs to be larger than the quilt top. If you choose to ha
Post a Comment
Read more
More posts